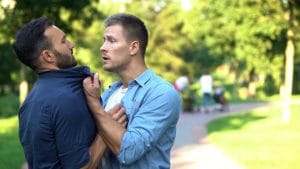 Protecting the rights of the accused throughout Connecticut

Convictions for a felony or misdemeanor in Connecticut are severe. A conviction could mean imprisonment, especially if it is a crime such as assault. Convictions mean large fines. You may be ordered to pay for any medical treatment the victim needs. There are also secondary consequences. You may have a hard time finding a job or a place to live if an employer or apartment owner runs a background check.

At Barry, Barall, Taylor & Levesque, LLC, our Hartford criminal defense lawyers have been fighting for the accused for 20 years. We represent you through all stages of the criminal process including the arrest, bail hearing, preliminary hearing, suppression motions, plea negotiations, and trial. We fight aggressively to have the charges dismissed, to obtain acquittals, and to negotiate just plea bargains. We handle every type of assault charge including 1st, 2nd, and 3rd-degree assault. Our lawyers understand the defenses that can help you keep your freedom.

What are the types of assault crimes in Hartford, Connecticut?

The essence of an assault charge is that you physically injure, or try to injure, someone. Connecticut defines assault offenses as follows:

The penalties for a Class B felony will include imprisonment for five to 20 years. The maximum fine is $15,000.

This crime is a class D felony unless someone is seriously physically injured – in which event, the crime is a Class C felony. The penalties for a Class D felony are one to five years in prison and up to $5,000 in fines. If a gun is involved, the defendant must serve at least one year in prison.

If convicted of the Class A misdemeanor, you can be sentenced up to one year. The sentence cannot be suspended or reduced. You can be fined up to $2,000.

If convicted, the defendant’s motor vehicle license will be suspended for one year. The defendant will need to install and use an interlock ignition device for two years.

Assault charges can come from barroom brawls, fist fights, and road rage. They can also include deliberate attacks with a weapon. Some of the key factors include whether the conduct was intentional or just negligent, the severity of the victim’s injuries, and whether a weapon was used. They may include who the victim was, as assaults on certain individuals, like police or civil servants, are categorized differently.

What factors may result in an increase in penalties for an assault offense in Hartford?

Increases in penalties may apply if the assault involves a victim who is any of the following:

Defendants may also be charged with family violence offenses if the victim is a relative, spouse, in-law, roommate, or someone the defendant dated or is dating.

What defenses can be asserted in Hartford assault cases?

A strong legal defense includes holding the prosecution to its burden to prove each element of an offense beyond a reasonable doubt. Many times, the prosecution can show there was an injury, but they can’t prove “intent.” When there are injuries, we often argue that the injuries were accidental, and therefore not applicable in an assault charge. We seek to suppress any evidence obtained in violation of your Constitutional rights.

Will I automatically go to prison for an assault conviction in Hartford, CT?

Generally, because assault involves violence, there are no alternatives to being tried for assault offenses. Some offenses require mandatory imprisonment, based on sentencing guidelines.

However, there may be alternatives to incarceration for some assault crimes depending on the circumstances. In some cases, the judge may approve substance abuse treatments, anger management classes, and therapy. If you are a first-time offender accused of a misdemeanor assault crime, you could be eligible for pre-trial diversion. If the charges against you involve domestic violence, then you may be able to enter the Family Violence Education Program rather than go to prison. If you successfully complete the program, your case can be dismissed entirely. If your child is accused of an assault crime, there may be alternatives available to him or her as a “youthful offender.” Our skilled Hartford defense lawyers will explain if these options are available for your personal situation.

Strong protection for defendants charged with assault offenses in Hartford

At Barry, Barall, Taylor & Levesque, LLC, our defense lawyers understand how frightened defendants are. Your freedom and reputation are at stake. In assault cases, there are often circumstances that help either justify your actions or reduce the severity of your actions. We move quickly to assert your rights and preserve your defenses. We are experienced at negotiating with prosecutors and arguing criminal cases before a jury. You can reach us by calling 860-649-4400 or filling out our contact form.