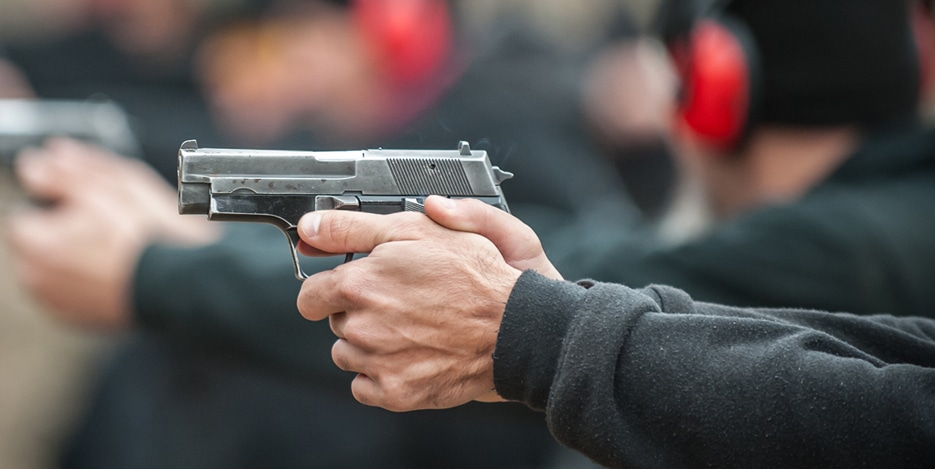 After the Sandy Hook tragedy in 2012, Connecticut lawmakers passed strict legislation banning sales of assault rifles and high-capacity magazines, as well as toughening up gun registration requirements. They also expanded the definitions of regulated firearms and ammunition in our state, which can make legally owning and using firearms in Connecticut a bit complicated if you’re not up-to-date on state laws.

Every responsible gun owner understands that the laws regulating firearms and weapon use are intended to protect all residents of the state from harm. And, because of this, any crime involving a firearm is taken and prosecuted very seriously and prosecuted very seriously. When we talk about firearm crimes, we mean any offense that involves the illegal use of a gun, the improper use of a firearm or the use of a gun to carry out another illegal action.

The Hartford criminal defense attorneys at Barry, Barall, Taylor & Levesque, LLC provide smart, aggressive representation when you’ve been accused of a gun crime. We know how to defend your constitutional rights and we’ll put our extensive legal knowledge to work for you. Let our attorneys help you fight the charges against you. Call us today.

Unfortunately, there are many different ways you might find yourself facing gun charges – sometimes even unintentionally. You may have made an honest mistake, like failing to renew your concealed weapon permit on time, or improperly locking your gun case. Whatever your situation may be, it’s vital you secure the services of skilled gun crime defense lawyers to protect your rights and work to prevent you from serving any jail time.

We aggressively defend our clients against common firearms-related offenses and charges, including:

If you’re facing funs or weapons charges, our attorneys can guide you through the process and present you with all possible legal options.

Pistols and revolvers both fall under the category of handguns, as they each have a barrel of less than 12 inches in length. You must have a permit for legal possession of a handgun, and you are required to have this permit handy when you have the handgun on your person. Carrying a handgun without a permit can result in up to five years in jail with a mandatory minimum of one year, and a fine of up to $1,000. Even if you have a permit for your gun but fail to show it to authorities, you can also be charged with an infraction and levied a fine.

Rifles and shotguns both fall into the category of “long guns”. Technically you don’t need a permit to carry or own a long gun in Connecticut as they are generally used for hunting purposes, but you do need a long gun “eligibility certificate.” According to the State Department of Energy & Environmental Protection, to apply for this certificate you must be at least 18 years old, show proof of having successfully completed a firearms training course, have a criminal history background check and must not have a history of psychiatric disability. You must also undergo state and federal background check. Conviction of illegal possession of a long gun can result in a minimum of two years in jail and $5,000 in fines.

Assault weapons are defined as selective-fire firearms capable of fully automatic, semi-automatic or burst fire. These can include the parts of combination of parts that convert a firearm into an assault weapon. Here in Hartford and throughout the state, it’s against the law to possess, sell or trade an assault weapon, and it carries an absolute minimum of one year in jail.

The state defines a machine gun as a weapon that automatically shoots more than one bullet or projectile by a single press of the trigger without reloading. It’s illegal to possess or use a machine gun for an offensive or aggressive purpose, as well as selling, giving or transferring a machine gun to person under the age of 16 for any purpose. Authorities presume a machine gun is used for an offensive or aggressive purpose if the firearm is found outside the primary residence of the person who owns the gun, if it’s possessed by an unnaturalized citizen, possessed by a convicted criminal, or has been modified and unregistered. Violation of machine gun laws can result in up to 10 years in prison and fines of up to $1,000.

Our Hartford gun and weapons attorneys understand the complex laws surrounding firearms ownership and possession. We work hard on your defense, negotiating to minimize the charges against you or have them dropped entirely. We are not afraid to go to trial if that’s what it takes to clear your name.

If you’re facing gun charges, you need smart and experienced legal representation. The criminal defense attorneys at Barry, Barall, Taylor & Levesque, LLC have been working for decades for people just like you. We understand the local court system and we understand your constitutional rights. Talk to our legal team today. We’re located right off I-84 or I-384 in Manchester. To schedule a consultation with one of our attorneys in Hartford or Manchester, please call 860-649-4400 or fill out our contact form.