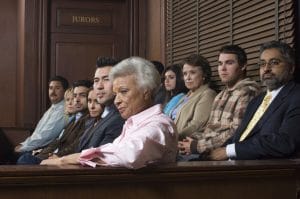 Jury sequestration is the isolation of a jury to avoid accidental or deliberate tainting of the jury by exposing them to outside influence or information that is not admissible in court and can be a “hot” topic for criminal defense lawyers. On one hand, trying to control the information jury members see and hear outside of court can be a bit like herding cats. On the other hand, a defendant’s “jury of their peers” is often composed of lay people of nearly all walks of life, who are all equally subjected to news and media. Exposure of jury members to media coverage about high-profile cases can present a myriad of legal issues.

There have been many high-profile criminal cases over the years where juries were sequestered, such as Bill Cosby’s sexual assault trial, and the murder trials of Casey Anthony and George Zimmerman. The O.J. Simpson trial required the longest sequestration in history: 265 days, at a cost of $2 million.

What does it mean to sequester a jury?

When a jury is sequestered, the judge places them beyond the public reach. When this is ordered, the jury is typically housed in a hotel near the courthouse. The jurors are not permitted to watch television or read the news. They have only limited contact with their family and are under supervision around the clock.

What is the goal of jury sequestration?

The sequestration of a jury is meant to prevent their opinions from becoming tainted by the media and outside influences, and to keep them from being bribed or threatened by outside influences. A juror’s objective view of a case can be obstructed by listening to the news, speaking with members of the public, and even hearing the discussions of attorneys outside of the courtroom. All of these influences on a jury can prevent the defendant from having a fair and unbiased trial with a jury of his or her peers.

It can be a difficult process, which is why juries are not sequestered all that often. A more common and simpler remedy is a change of venue request – asking the courts to allow a case to proceed in a different town or county, to help minimize the impact of outside influence on a jury. In high profile cases, though, a change of venue may not even make a difference. In such instances, juries will likely be sequestered.

To truly isolate a jury, you need to be able to control its members access to everything, including television, films, news sources, cell phones, etc. Jury members even have their mail monitored and are prohibited from discussing the trial with one another.

It is possible for jury sequestration to work if it is handled properly by the judge presiding over the case. For example, the jury in the George Zimmerman trial was sequestered for 22 days. However, they were allowed to go bowling, get manicures, see movies, and go shopping as a group. These outings helped the jurors keep their sanity, though they stopped once the time came for the jury to deliberate on a verdict.

Sequestration can impact the psychological health of the jurors

There is a reason isolation is used as a punishment in prison – it is incredibly challenging. Imagine being unable to discuss the most pressing issue in your life with someone you love and trust – not a spouse, not a parent, not even your therapist. Imagine being escorted by armed guards to and from a bathroom. Now imagine doing it for 265 days straight.

The jurors on the Bill Cosby case were sequestered from the very beginning of the case, which had a profound impact on many of them. “People describe, initially, loneliness, boredom, and discomfort,” Greg Hurley, an analyst with the National Center for State Courts, told The Cut. “That will convert over time for some people to a lot of anxiety, stress, depression, and generally negative feelings … You’re removed from your lifestyle: You’re not going to have your TV, your couch, your loved ones, your pets.”

Sequestered jurors can get antsy and snappish. Instead of ensuring that the defendant gets a fair trial, discussions between jurors can become contentious, heightening the pressure on jurors who are holding out on coming to a consensus. Another concern is that “groupthink” comes into play when a jury is sequestered. You are with the same people around the clock for days and weeks, and you begin to simply think like everyone else because of it. It can also keep a defendant from getting a fair trial, because there is always a risk of everyone simply falling in line with the majority opinion.

So does jury sequestration work? It all depends on the jury members. Even in cases where the justice system treats them right, sequestration can begin to feel like a prison. It is possible, perhaps, that some jurors become more sympathetic to the men and women on trial, because they begin to understand what life will be like for the incarcerated. On the other hand, they may make rash decisions simply to get out of the experience themselves. This is why sequestering a jury is always a risk, and why it is a rarely-used option.

At Barry, Barall & Spinella, LLC, we understand that a high-profile trial creates a lot of anxiety for jurors and defendants alike. Our criminal defense attorneys in Hartford and Manchester will review your case and help you fight the charges levied against you. We will also work hard to build a jury that can help resolve the trial in a favorable outcome for you. Call us today at 860-649-4400 or complete our contact form to schedule a consultation today.