Skip to content
Home / Blog / Drunk Driving and the Holidays 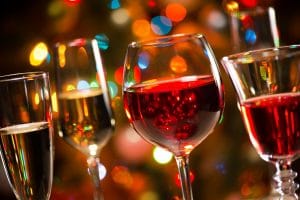 The holidays, from Thanksgiving through New Year’s, are an excuse for parties, for socializing, and for get-togethers – even with the pandemic. A natural ingredient of these fun events is a beer, some wine, or one of the following holiday drinks listed on the aptly named Eat This website:

(And most holiday revelers love a sip of Eggnog.)

It’s OK to drink if you’re old enough. What’s not OK is to drink and drive. In Connecticut, and across the country, if your blood alcohol content (BAC) level is .08 or more and you drive – you can be arrested for drunk driving. The limit is just .04 if you’re a commercial driver such as the many people making deliveries this time of year.

During the holidays, police departments often are more aggressive in trying to stop and arrest drunk drivers. One common tactic is to use sobriety checkpoints. These are roadblocks initiated by law enforcement that set up in specific locations in a community. Checkpoints are used to stop drivers on a random basis. Normally, police need to have reasonable grounds to think you were driving while intoxicated to stop you.

The police must follow proper procedures in order to conduct a sobriety checkpoint – including announcing (online and in print) when the checkpoint will be in operation and where the checkpoint will be. The checkpoint should be at a place that is known to have a history of DUI accidents or DUI arrests. There has to be a neutral formula, such as stopping every 10th car, to ensure there is no bias in the people who are stopped. Checkpoints should be for short specific time periods.

In 2017, Connecticut had the highest drunk driving fatality rate in the U.S. Out of the 278 fatal accidents that year, 43% involved one or more persons with a BAC of .08 or higher.

If you know there’s going to be a checkpoint at a certain location, then try to avoid that location. The checkpoint should be identified as a checkpoint. You still have rights if the police ask you to submit to a breath test – including the right to refuse the test – though there may be consequences for a refusal such as a suspension of your driver’s license.

At Barry & Barall, LLC, our Manchester DUI defense lawyers fight to have the charges against you dismissed. We contest the validity of the police stop and the validity of any breath or blood tests. We question the police officers to show there’s not enough evidence to prove you were the driver, or that you were intoxicated while driving. We also work to have the charges reduced to less serious offenses. We have a strong track record of dismissals, acquittals, and plea agreements in criminal cases. If you’ve been charged with a DUI, get the help you need. Call us at 860-649-4400 or use our contact form to schedule an appointment. We represent defendants in Hartford, Manchester, and the surrounding areas.